In 1976, the israeli government annouced its intention to expropriate large areas of land belonging exclusively to arab citizens. To protest this decision, the mayors of arab cities and villages in Israel called for a day of strike and demonstrations in March 30th, 1976. This days was called “The Land Day”. 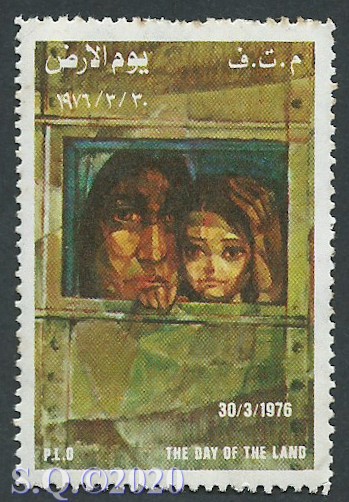 The israeli army and police raided the arab towns to disperse the demonstrations, and fired at unarmed citizens killing 6 arab citizens.

Since that date, the memory of this day has been perpetuated and celebrated every 30th of March as a symbol of the Palestinians’ attachment to their land.

The Stamp above was issued by the Palestine Liberation Organization (P.L.O) to commemorate the Palestinian Land Day.

This was not used as postal stamp.

The Battle of Al-Karameh: Palestine 1968
Stamps of Palestine
Stamps of Morocoo