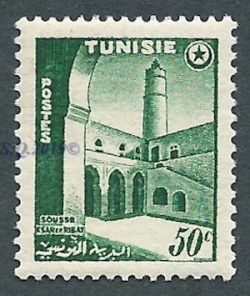 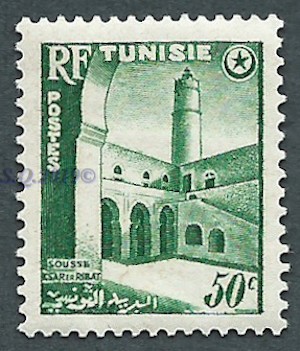 Tunisia was subject to French colonialism (French mandate) under the Bardot Treaty, imposed on Mohamed Al-Sadiq Bey after the siege of his palace on May 12, 1881. – Since that date, postage stamps have been issued under French administration until the independence of Tunisia.

The independence of Tunisia was proclaimed on March 20, 1956. Independent Tunisia was a kingdom during the reign of Al-Amin Bey Ibn Muhammad al-Habib, who continued to reign until the proclamation of the republic which ended two and a half centuries of the Husaynide dynasty on July 25, 1957.-

After independence, the first stamps issued by Tunisia in 1956 were an amendment to a series of stamps issued under French rule in 1954, where the two letters RF were deleted.

These two letters are the abbreviation of “French Republic”.

Tunisia – Solidarity with the Palestinian people