Less than a year after independence, President Ahmed bin Bella (1916-2012) proposed a text for a constitution for the Algerian Republic on the National Liberation Front delegates meeting on July 31 – July 1963, which was adopted after discussion and then presented to a popular referendum, where it was approved by an overwhelming majority on September 8, 1963 as the first A constitution for the nascent Algerian Republic. 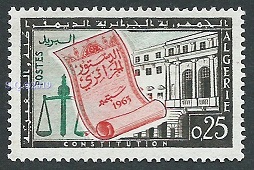 The 1963 Constitution enshrined human rights, equality between citizens, the rejection of all forms of discrimination, freedom of expression, assembly, belief, and compulsory and free education. On the other hand, it prevented political pluralism and consecrated the National Liberation Front as a single party, which created a number of differences with poles in the national movement who intended to create opposition parties.

The constitution continued to operate from the date it was passed until its disruption after the coup led by then-Minister of Defense Houari Boumediene in June 1965, which toppled President Ben Bella and sent him to a 15-year prison.

This stamp was issued in October 1963.

Costumes from the region of Oran in Algeria : 1971

Algeria 1964: Safeguarding of the monuments of Nubia

Costume from the Aurès region in Algeria : 1971

Costumes from the region of Oran in Algeria : 1971

Algeria 1964: Safeguarding of the monuments of Nubia

Costume from the Aurès region in Algeria : 1971
Stamps of Palestine
Stamps of Morocoo