In 1971, the Jordanian post issued a set of 5 stamps representing important tourist sites and landscapes in the Hashemite Kingdom of Jordan.

The first stamp represents camels and Bedouins near the dead sea. The dead sea is a salt lake bordered by Jordan and Palestine. The lake’s surface is 430.5 metres below sea level, making its shores the lowest land-based elevation on Earth. It is known for its high salinity and the therapeutic effect of its salts. It is one of the most important tourist attractions in Jordan. 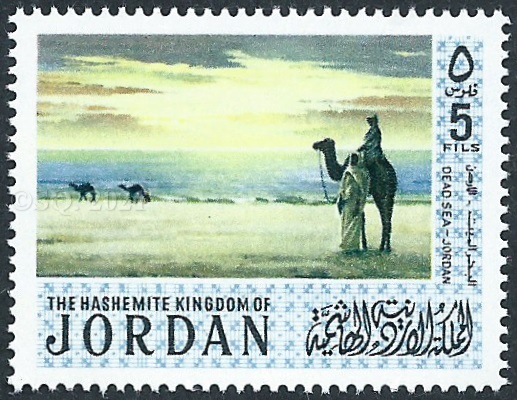 The city of Petra

The second stamp represents the archaeological and historical city of Petra. It is located in the Ma’an Governorate in the south of the Hashemite Kingdom of Jordan. It is famous for its rock-cut architecture and ancient aqueduct system. It was called the “Pink City” due to the colours of its rocks.
Petra was founded approximately in 312 BC as the capital of the Nabataean kingdom. It assumed a prominent position for many years, as it was located on the Silk Road, between civilizations of Mesopotamia, Palestine, and Egypt. 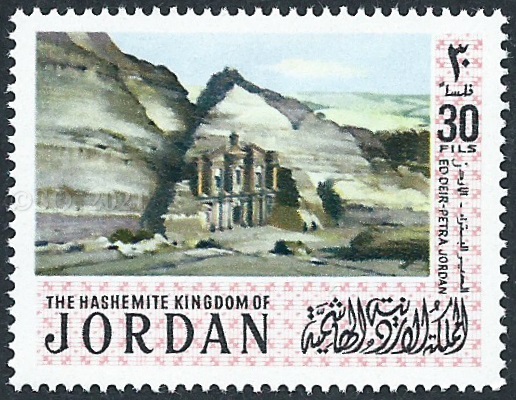 The Via Dolorosa in Jerusalem

Eastern part of Jerusalem was part of the Jordanian territory from 1951 until its occupation by the Israeli army in 1967. Today it is recognized as the capital of the state of Palestine.

The fourth stamp features a landscape of Jordan river. The Jordan river, also known as Nahr Al Sharieat, is a 251-kilometre-long river that flows roughly north to south through the Lake of Tiberias and on to the Dead Sea. It is fed by the Hasbani River coming from Lebanon and Banias River flowing from the Syrian Golan Heights. Jordan and the Syrian Golan Heights border the Jordan River to the east and Palestine to borders it from the west.

The last stamp refers to Bethlehem. It represents the bell of the church of nativity with a panoramic view of the city of Bethlehem.

This set includes stamps representing the old city of Jerusalem and the Church of Nativity in Bethlehem. These two cities are in the Palestinian territories in the west bank. This territory was annexed as part of the Hashemite kingdom of Jordan in 1951. It remained under Jordanian control until its occupation by Israel in 1967. Jordan recognized this territory as part of Palestine in 1994.