In 1963 the Syrian Post issued a set of 6 stamps representing women in traditional costumes from different regions of the country. This stamp represents the costume of the city of Mhardeh, a small Christian town northwest of Hama.

In the city of Mahardeh, ancient Greek and Byzantine monuments testify to a rich and ancient history. There are many monuments in Mhardeh, the most important of which is the famous Shayzar Castle, which is located on a rocky fortified hill and is one of the important castles in the region.

There is also a temple in Mhardeh which archaeologists believe to be an ancient Greek building. It is now known as the Church of Our Lady. The city and its region there are also a number of ancient buildings and other Byzantine tombs. 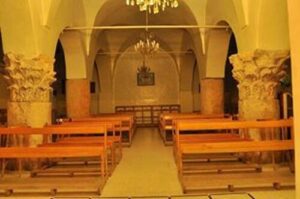 An archaeological expedition working in the area found human traces dating back to the Stone Age, in a cave. They found flint stone tools and knives there, in addition to numerous finds that indicate that Mesolithic humans settled in this area.

This stamp is the third in a series of six costume stamps issued in 1963.

Costume of the city of Mahardah: Syria 1963

Costume of the region of Afrin: Syria 1963

Costume of the city of Mahardah: Syria 1963

Costume of the region of Afrin: Syria 1963